Gundam Universe is a really amazing new series of action figures from TAMASHII Nations in June of 2019. This 6 inch sized action figure is priced around $25.

At first, Wing Gundam. This is a really posable, highly detailed portrayal. Everything from these binders on the back to the arms, elbows, and knees are posable. And as you can see the fine detail is amazing, it’s a very anime accurate appearance.

You can get some really classic posing. The Gundam Universe figures are designed to be fun for more than just die-hard collectors or die-hard Gundam fans. That’s the defining feature of this new series.

Next, the RX-78-2 Gundam. You have the shield, the rifle, and the sabers, the fundamental load-out for this character.

It’s very angular, and there’s a lot of fine detail, panels and such. But the most distinctive thing about it is, how incredibly posable it is. Like the Wing Gundam, a lot of ball joints are used to give a wide range of motion.

The skirts are articulated, to give the legs greater freedom. Even in these wide legged stances, it can keep both feet on the ground. It’s due to ball joints in the ankles.

The last item of wave1 is Unicorn Gundam. There’s an amazing illustration on the package. It captures the dynamic appearance of the mobile suit.

Each figure comes with some hands, fists, and optional hands shaped to hold shields, weapons, things like that. Just what you need to display them in static or action shots.

The Gundam Universe series’ sharp appearance is a great fit for this sharp-looking Gundam. Look at that Psycoframe glow beneath the armor. They rival the best model kits not only in terms of visual information.

Still more, each figure comes with a connector for TAMASHII STAGE. Then you can plug it right on, pose them in nice flying poses.

Gundam Universe developed to commemorate the 40th anniversary of “Gundam” series. For wave 2 is Deathsythe from “Gundam Wing”, Banshee from “Gundam Unicorn”, Barbatos from “Iron-Blooded Orphans”. Wave 2 items are being released on October 2019. Stay Tuned for next wave! 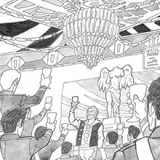 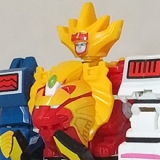